A symbol of glory 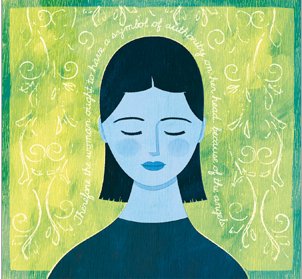 I will write precisely one column on this, and one column is all it deserves. I have taken to wearing a head covering during worship. I expect one in a thousand readers follows this practice, so you might all be annoyed with me.

If this were the '50s, you would simply say "So what?" to my haute couture confession. All women—even Protestants—sported hats on Sunday morning, though as the Cheshire Cat's smile on a long-faded piety. I remember that JFK killed the male hat industry. I'm not sure what killed the distaff counterpart; all I know is back then hats were worn to church because hats were worn to church.

I was not on a campaign against or for anything, although I admit that Dietrich Bonhoeffer has marked me in some way I can't shake. Speaking of revival he said: "There arises a more determined quest for him who is the sole object of it all, for Jesus Christ himself. What did Jesus mean to say to us? . . . What we want to know is not, what would this or that man, or this or that Church, have of us, but what Jesus Christ himself wants of us" (The Cost of Discipleship).

I'm having a revival. It's been going on about three years, though it took a while to notice, just as you don't realize a radiator has warmed your room till it's been happening a while. My personal great awakening involves "a more determined quest for Him who is the sole object of it all." This means trying "to discern what is pleasing to the Lord " (Ephesians 5:10), even when it's baffling.

It means launching out and putting a symbol of "glory" on my head at church because I think 1 Corinthians 11 tells me to, even if I may turn out in the end to be wrong. That's because I will definitely be wrong if I don't do what I think God is commanding. To disobey what I think God is telling me is to disobey God. There is nothing more a man can do at any given moment than say yes to God as he hears Him. It is God Himself who gently steers our boats, and corrects their course, but only as we're moving toward Him (Philippians 3:15-16).

Granted, "Let her cover her head" (1 Corinthians 11:6) may not be as important as "pour yourself out for the hungry" (Isaiah 58:10)—if you can call any part of God's Word unimportant. But I figure if the king tells you to go conquer the hinterlands one day, and tells you to shoe his horse the next day, you should do them both without slacking. He is the king.

There's a lot more than mantillas at stake for me personally. I want to stop putting filters between me and the Word of God. I appreciate scholarship, but it is rarely conclusive. The question is this: When push comes to shove, do I go with Christian peer pressure or with God's Word as I see it? All my obediences to received practice are suspect when I balk at the one point where conscience makes a contrary demand. It's when there is disjunction that my true allegiance shows.

I read in 1 Corinthians 11 that the woman's head is to be covered in worship. The modern Christian consensus tells me that is a relative and obsolete command, dealing with some first-century problem in the city of Corinth. My high-school literary skills tell me otherwise: The command is rooted in creation (verses 7-9) and in nature (verse 14). And if that weren't ironclad enough, I am to cover my head "because of the angels."

The angel detail is so cryptic, so off the wall, so without explanation, that it becomes the strongest argument of all. Where is the "cultural relativity" case now, where angels transcend all historical agitations?

The Apostle Paul says there are some convictions we best keep between ourselves and God (Romans 14:22). Maybe head covering is one of those. The saleslady ringing up my little black lacy number at the Catholic shop asked if I was going to Rome. I didn't want to get into it with her, but I've gone into it with you, for better or worse. Just for one column, though, which is no doubt all it deserves.